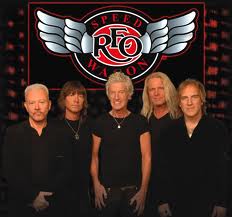 The concert starts at 8 pm. Tickets cost $63 – $88.50 and can be purchased in person at Celebrity Attractions’ Box Office, Robinson Center Box Office, all Ticketmaster outlets, via phone at (800) 745-3000 or online at Ticketmaster.com.

The Robinson Center Music Hall is located at 426 W Markham.(Broadway and Markham).

It seems unbelievable, but in just a few years REO SPEEDWAGON will celebrate its 50th anniversary in music. The band that brought audiences the No. 1 mega hits “Keep On Loving You,” “Can’t Fight This Feeling Anymore,” and a string of Top 40 favorites continues to electrify concert stages worldwide.

Formed in 1967, signed in 1971, and fronted by iconic vocalist Kevin Cronin since 1972, REO SPEEDWAGON is a band where the main constant over the decades is a never-ending desire to give their all to their fans, year in and year out. REO (named after the precursor to the light truck) rode to gigs in station wagons, hopping from small gigs to even tinier gigs, just to get their name out.