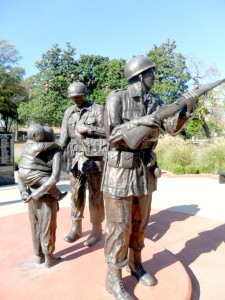 Brigadier General Douglas MacArthur, who became the Supreme Allied Commander of the Pacific Area during World War II, was born here in 1880. The park has numerous historical plaques honoring General MacArthur and others who have contributed to fighting the wars that have kept our nation free.

Also located on the grounds of the 36 acre city park are the Arkansas Arts Center and Children’s Theatre. The Arts Center Museum houses paintings and works of art contributed by former Arkansas Governor, Winthrop Rockefeller. Admission is Free to the Arts Center and the MacArthur Museum of Arkansas Military History.

See these links for more information: