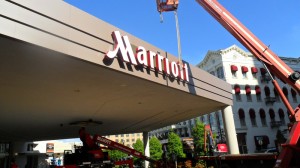 On Wednesday May 1, 2013 the Little Rock Marriott officially took over management of the Little Rock Peabody Hotel. The City of Little Rock owns the hotel and convention center complex which is part of the facility. The new Marriott signs went up on Tuesday,  April 30. The famous Peabody ducks, who swam in the lobby during the day, put in their last appearance on Tuesday and left the pool for the final time. They will  returned to their birthplace on a farm near Scott, Arkansas, and they may be reassigned to the Memphis Peabody or Orlando Peabody.

Ducks have been part of the Peabody tradition for many years. People enjoyed watching them march to and from their pool in the morning and afternoon. The Duckmaster and honorary Duckmasters told the story of the ducks every day and they will be missed by young and old alike.

The Marriott as part of their new lease have agreed to spend 16 million dollars for renovations. 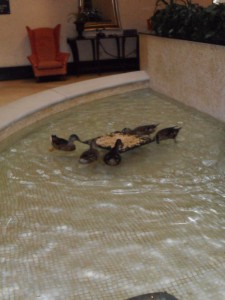 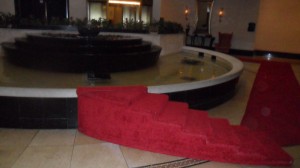